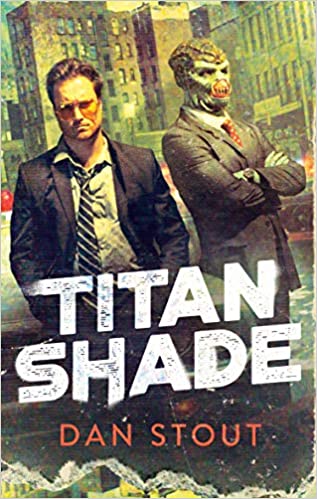 It is no surprise that our protagonist (I won’t say “hero,” or Detective Carter might sneer from the pages at me), discovers he is one of the few honest cops left in an oil town that finds itself a few decades past its prime boom era.

A seemingly impossible city on the ice plains, where the ultra rich and the poverty stricken are forced into close quarters by the necessity of the thermal vents provided by the nearby volcano. The mountain lends its name and legends to Titanshade, the settlement turned oil town turned financial heart of the nation. But Titanshade’s oil fields are running dry, and everyone has plots and anxieties about the future of their city.

Corruption and casual disregard for the law have become normalized. But a high profile political murder isn’t something to be brushed under the snow drift to be forgotten.

With the rest of the civilized world far to the south where frostbite isn’t a daily concern, Titanshade has had to manage its own affairs. Like many outpost towns, Titanshade has an air of fierce independence, an attitude shared by our protagonist, Detective Carter.

Within the first pages, I didn’t expect to like Carter. But that’s ok, he’s the sort of messed up asshole cop that you love to hate, then hate to love; a character that I understand is not uncommon in cop dramas.

The voice is presented as “gritty noir,” but the background music isn’t muted trumpets and soft, jazzy, off beat syncopation, but rather Disco beats and the opposing forces of thermal drafts hitting cold air, and a susurrus of snow falling and drifting.

Noir and detective novels aren’t my usual habit, though Titanshade isn’t just a detective story. This a world that isn’t quite Earth, but might be. A world that used to have plentiful magic, but those reserves have dried up around the world, just as the oil is drying up in Titanshade. A world populated by five intelligent species. A world that either has parallel evolution of humans, pagers, and disco, or it’s proved that everything is new again and by the time the tectonic plates of the Earth come back around to form another Pangea, we will have to survive disco a second time.

I love it when a story walks that line well, not committing to either fantasy or sci-fi. It bucks all definitions and says, “HEY, stop trying to classify me while I’m telling you a story!”

But it’s not the genre that keeps me reading a story. It’s the characters. The populace is this world is drawn sharply by both the author and our protagonist, Detective Carter. Carter applies a critically analytical cop eye to everything in his world. He’s an observer, he files away facts and observations till he can use them in his work. We the reader see the world through his eyes, good thing we aren’t as jaded as he is. His critical gaze is just as harsh when he turns it inward, but everyone has their own personal demons, right? Being an observer, a fact finder, a truth seeker, means sometimes the truth has a softer side, sometimes the facts can tell more than one story, and sometimes an observer can see the ways of the world spelled out in litter in the gutter, or the view inside a hallway lit only by streetlight. Nothing can fix a murder, not even finding the murderer. But sometimes finding the shape of an everyday life can make the world make a little more sense again.

I think Carter’s story has been told, but I would happily return to this world to see what else Titanshade has to tell us about its inhabitants. (Mayhap the sorcerer-cop, the Divination Officer, will get to tell her story someday?)

I can’t recommend it as a detective story, purely because I don’t read those sorts of stories, and wouldn’t know how it stacks up. But as a character driven exploration of a city and its inhabitants, and one man’s journey to some personal solace? That I have to recommend.

Plus Carter has an adorable cat.

Disclaimer: The publisher gave us an advance copy of this book in exchange for an honest review, but we wouldn’t recommend it if we hadn’t liked it!
Category: News

For staff picks, shelf updates, news, special offers, and all of the friendly/nerdy/insane vibes you'd get if you were hanging out with us in person, you should follow us on Instagram and/or Facebook.